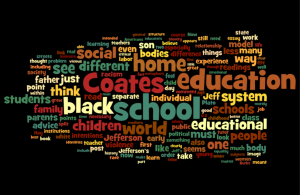 “There are personal, cultural, learning, and social reasons people don’t speak up in class.  Students of color and women of all races, introverts, the non-conventional thinkers, those from poor previous educational backgrounds, returning or “nontraditional students,” and those from cultures where speaking out is considered rude not participatory are all likely to be silent in a class where collaboration by difference is not structured as a principle of pedagogy and organization and design.   Who loses?  Everyone.  Arguments that are smart and valuable and can change a whole conversation get lost in silence and, sometimes, shame.  When that happens, we don’t really have discussion or collaboration.  We have group think–and that is why we all lose.”

Recently, I have been involved in several efforts to create spaces in which meaningful conversation can happen–spaces that don’t reproduce social hierarchies of privilege and power and instead welcome everyone’s contributions. In this blog, I’ll briefly highlight three examples of techniques for structuring equitable participation, whether in a classroom, meeting, or more informal conversation.

A few weeks ago, I was asked to facilitate the question and answer period for an academic event about supporting female teachers, particularly those who are teaching undergraduate humanities classes. While we often think that question and answer sessions just magically happen, these conversations often reproduce dominant hierarchies of privilege and power, especially in terms of who gets to speak and have their voice heard. Below is an except from my opening remarks on the importance of challenging these dynamics and two strategies, “progressive stack” and “step up, step back,” both of which I learned from the Occupy Wall Street movement and have since helped me in my efforts to create more inclusive environments, including in classrooms.

Taking “stack” just means keeping a list of people who wish to participate—offer a question or comment—during the Q & A. Rather than anxiously waving your hand around and wondering if you’ll be called on, if you would like to participate, signal to me in some way (a gesture, a dance move, a traditional hand-in-the-air, meaningful eye contact, etc.) and I will add you to the list.

However, we’re not just going to take stack, we are going to take progressive stack in an effort to foreground voices that are typically silenced in dominant culture. According to Justine and Zoë, two self-identified transwomen who were active in the movement, progressive stack means that “if you self-identify as trans, queer, a person of color, female, or as a member of any marginalized group you’re given priority on the list of people who want to speak – the stack. The most oppressed get to speak first.” As I take stack, I will also do my best to bump marginalized voices and those who haven’t yet had a chance to participate to the top. As you might already be thinking, taking stack is an imperfect method, especially because it relies on the perception of the person taking stack. For that reason, while I’ll start us off by taking stack, if at any point someone else wants to take over, please feel free to do so.

In addition to taking progressive stack, another way to try and structure equity into conversations is through a shared commitment, among participants, to “stepping up and stepping back.” Simply put, this entails being mindful of how much time we each take up and a collective commitment to making space for as many voices as possible.